In a magnificent late nineteenth-century palace, located in one of the most beautiful areas of Naples, the architect Andrea Pane was asked to create a house that could be fully modern while being in accordance with the history of the place. The apartment had to be a cosy home for a family with two young daughters and a representative space in which to welcome guest, surprising them with an impressive collection of contemporary works of art.

Two elements guided the whole project: the history of the building, linked to the nineteenth-century urbanisation of Chiaia district in Naples where the house is located, and the presence of the important collection of contemporary art owned by the customer. The disposition of the artworks in the 250 square meters house had to be carefully studied in order to enhance both the space hosting the artworks and the artworks themselves while avoiding creating a home-museum. The project is based on the continuous balance between historical references and contemporary culture, between memory and actuality, a balance obtained thanks to the designer’s experience, who is professor of architectural conservation and who has been able to translate his theoretical studies and knowledge into practice.

In the realisation of the project, carried out between 2012 and 2013, there is a clear separation between living area and sleeping area. From the compositional point of view, the environments follow each other alternating routes and resting areas, expansion and spatial compression. Moreover the use of large sliding panels makes the space flexible and mutable. The architect carefully studied materials, colours, textures and artificial lighting. The latter also has the fundamental role of emphasising the presence of the artworks. The lights are both hidden indirect sources placed in the countertop and direct lights that illuminate the spaces as a whole.

The first work of art of the house is placed at the very entrance of the apartment, it is a sculpture by Mimmo Paladino inserted inside a semi-circular niche that envelops and exalts it. Here the walls design refers to the late-nineteenth-century decorations present at the base of the building where the house is located. It is an intimate, compressed space, who welcomes and prepares the visitor to the following path. The next space in this path is a place of mediation in which the panels cover both the wardrobe and the bathroom for the guests. This is characterised by the presence of precious marbles used both as pavement and as wall covering. Further on is a living space in which the vertical margins are characterised by the presence of decorative panels which host various artworks, including a painting by David Tremlett and an artwork by Sol Lewitt. This is a fulcrum space: from here it is possible to either go to the living room, the sleeping area and the kitchen, hidden, together with the TV system, behind two sliding panels. The kitchen is dominated by the presence of grey which is the colour of the furnishings, the marble countertop and, in continuity, of the walls. It is directly connected to the dining room which is almost completely occupied by the table as to emphasise the role of the function to which the environment is dedicated.

Large sliding panels also separate the salon from the study area. Here returns the square decoration already encountered in the previous rooms and the pavement made of large format slabs of white statuary marble and the black marquina bands also used in the ornaments that decorate the doors framing of the entrance to the living room. The ceiling emphasises the pavement design, in fact, in this room as in the previous ones, there is a formal correspondence between the suspended ceiling characterised by cuts and geometric lines and the underlying area. Here two similar niches host an artwork by Carlo Alfano and one by Luca Pignatelli exalting them through the dark colour of the background which enhances their perception. Surprisingly placed on moving tracks one of the paintings may be moved in order to discover the projection hole of the home theatre system. On the walls are also artworks by Giulio Paolini, Armando de Stefano, Perino & Vele and a giant picture by photographer Darren Almond, located in a boiserie library set in the main wall of the studio. This, designed by the architect, refers to the ornamental motifs of the beginning of the twentieth century and is the background of the entire space. Mainly the colour on the walls is between grey and beige, chosen specifically in order to be a neutral base and to exalt the artworks exposed.

To access the sleeping area one must walk through a corridor that also leads, through a staircase, to the area dedicated to the housekeeper, which is placed on a mezzanine. The staircase is essential, sculptural, without handrails it is made of wooden overhanging steps underlined by carefully placed spotlights. The flooring of the sleeping area is in durmast parquet, marking a more intimate and homey space than the representative one of the living area. Each bedroom has its own private bathroom and is defined by the use of lively colours and specific materials. One of the daughter’s rooms is characterised by the choice of red: the vertical edges and the ceiling are white and red, the furnishings are in the same colours and on the architect’s design is the large wardrobe distinguished by the graphics, large letters that cover the whole surface, dialling the name of the room’s owner. Finally red is also the colour of the door that connects the room to its bathroom, which is covered with glassy mosaic of the same colour.

The bedroom of the other daughter is characterised by the use of tones ranging from violet, fuchsia and cyclamen, while plum-coloured mosaic covers the bedroom’s toilet. Also in this case the wardrobe is designed by the architect in colourful details and characterised by geometric designs. The library and the desk, encased in the wardrobe, create a small and intimate studio corner. One of the room’s wall is covered with a wallpaper by Alberta Saladino defined by optical motifs of the same shades already present in the room and with a design that accentuates the verticality of the space.

At the end of the corridor, in the more private area of the house, is located the master bedroom in which some full-height glazed walls leave the room in visual communication with part of the bathroom, specifically with the bathtub and shower covered with emperador marble. The presence of the glazed margin dilates the space of the room which actually is not very large. Other arrangements are used to optically expand the space: the mirrors placed on the wardrobe doors, the shelves on the wall behind the bed that grow progressively smaller as they get close to the window and give the impression of a deeper depth of the environment.

The project realised has a modernity that does not forget the past, is a meeting point between the most classic demands of the customer and the modern choices of the architect. All the details, finishes and light decorations refer to the formal aspects of the architectural languages of the early twentieth century, but here they are revisited and become fully contemporary. History and actuality dialogue in a contrast that emphasises their peculiarities by reinforcing each other and giving life to an entirely new and strongly balanced interior.

Refurbishment and interior design of apartment 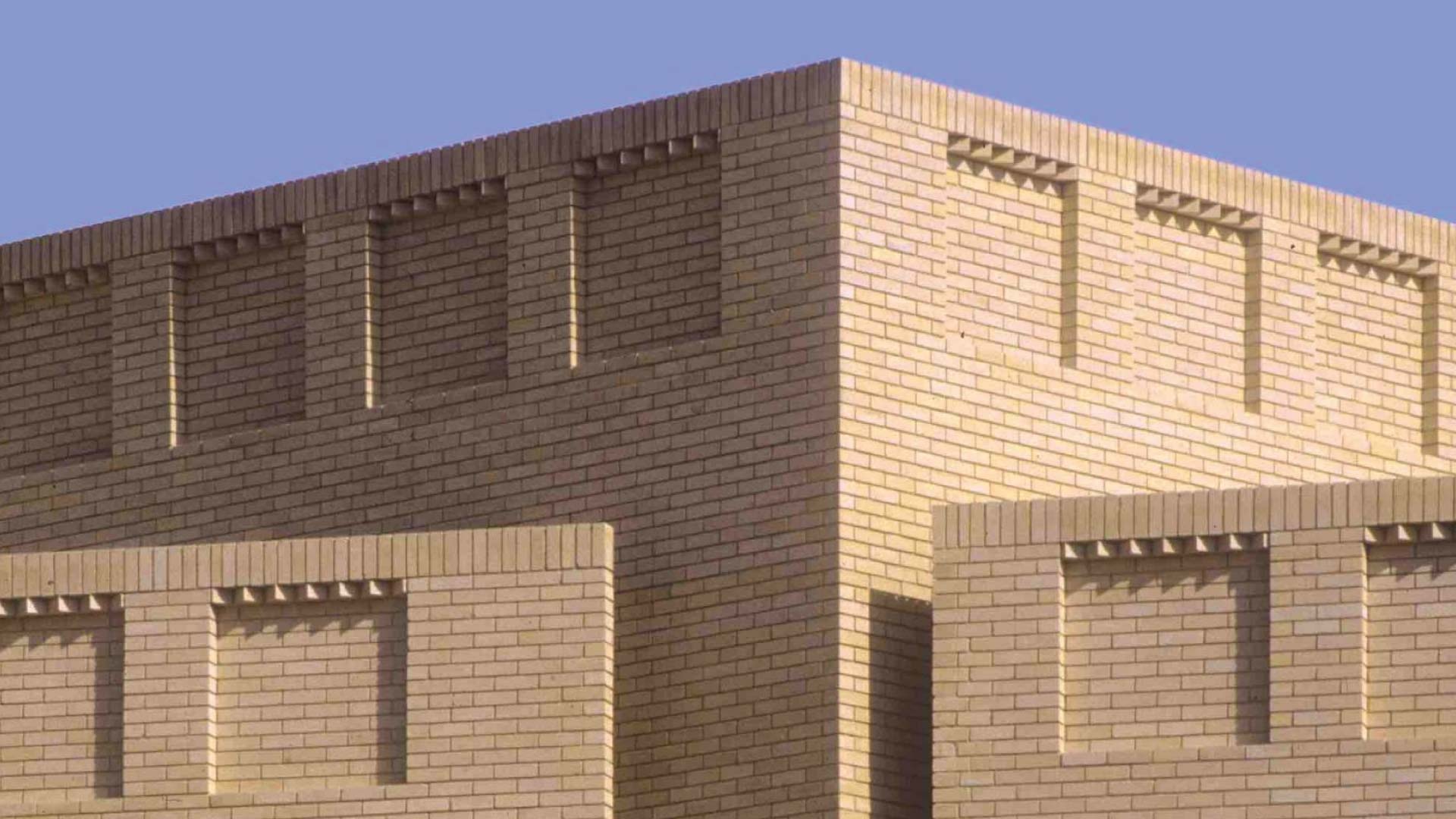 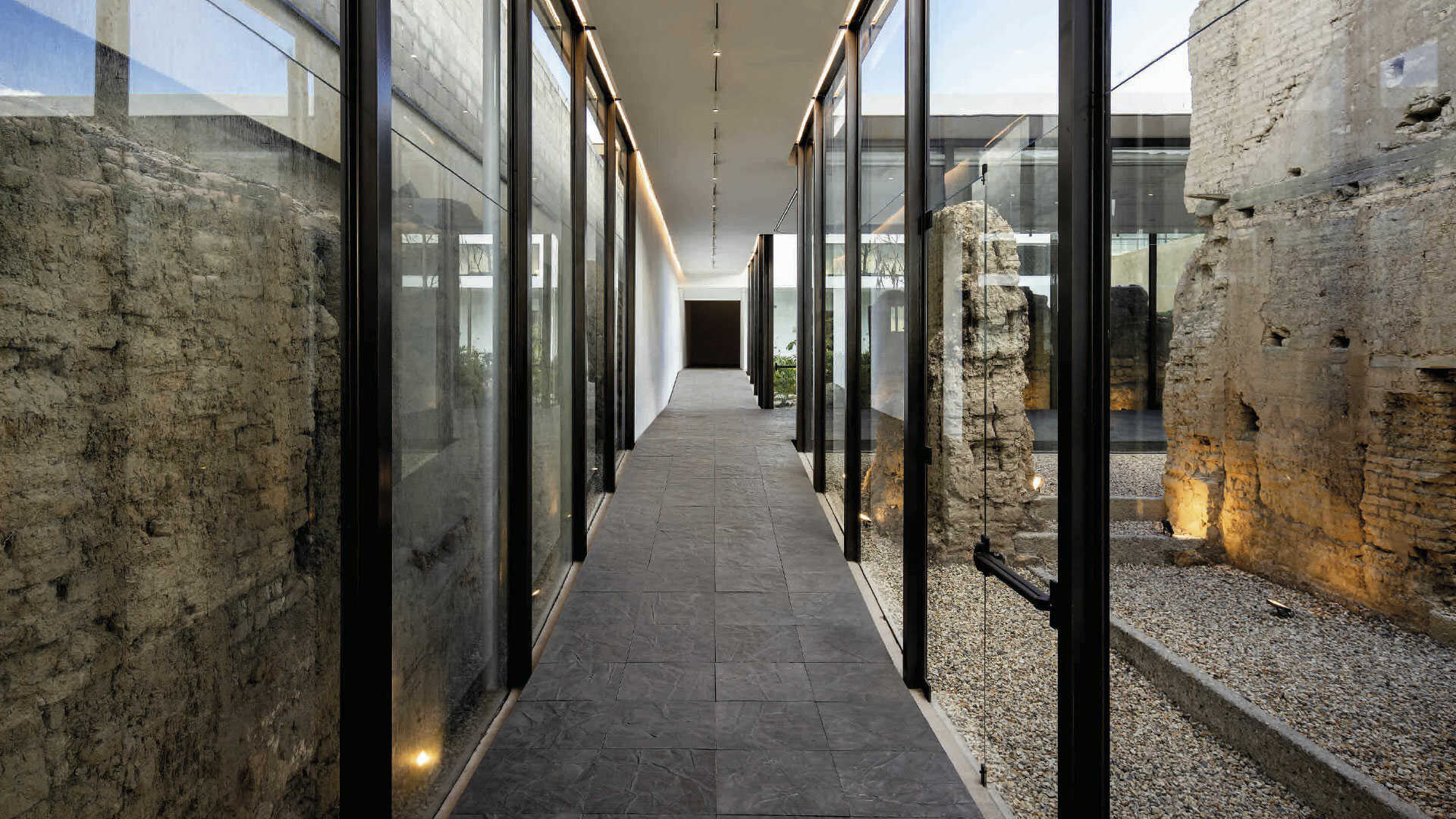 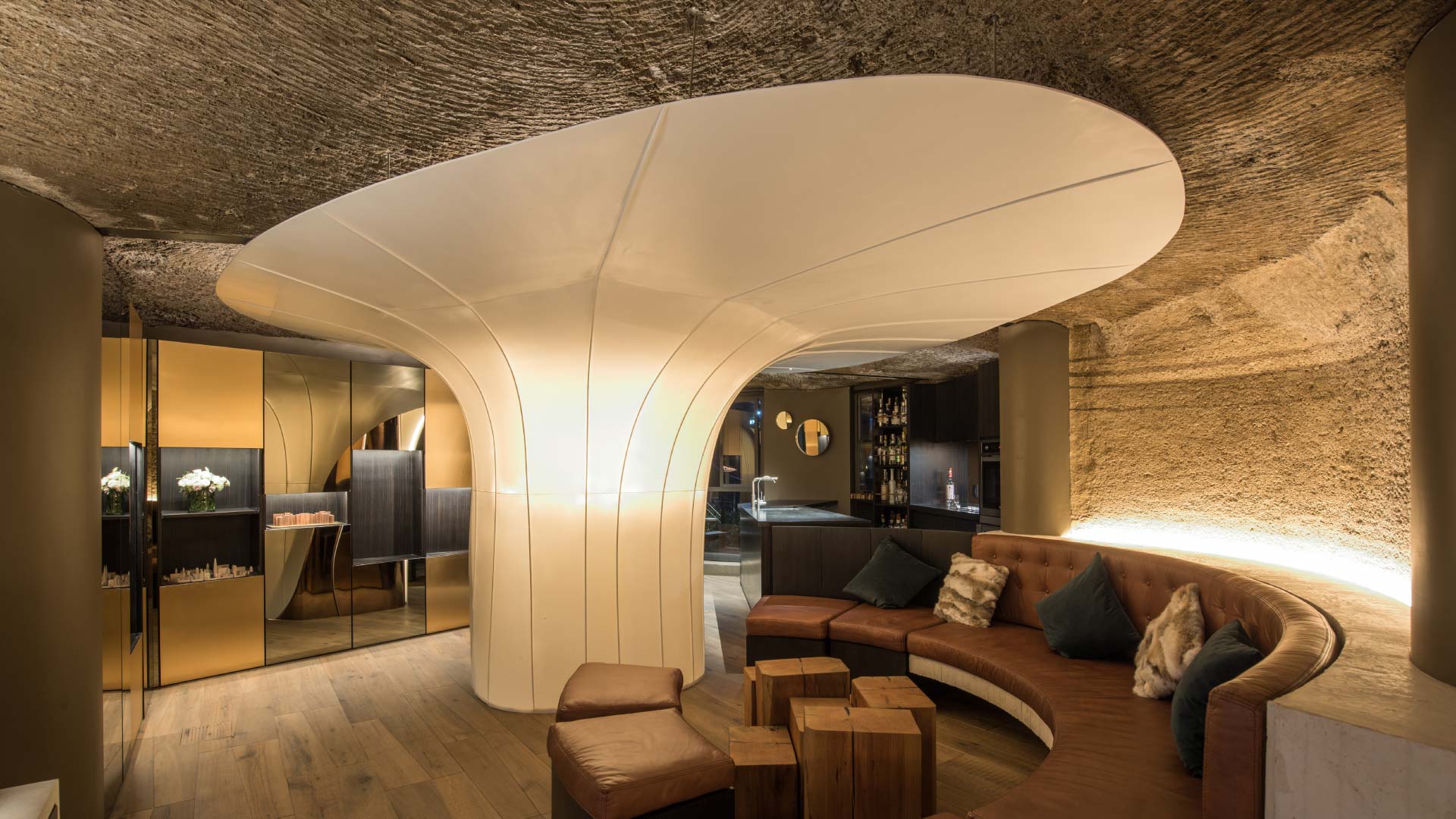